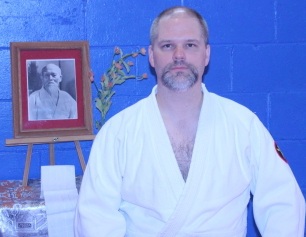 Porter Sensei holds the rank of yondan (4th degree black belt). He has been training Aikido since 1996. He started Aikido Omaha, LLC in 2007 with encouragement from his instructors. He also has experience with shotokan karate and other styles of martial arts.

He has over 100 contact training hours in Qi Gong (Longmen style) in addition to a daily practice.

He has taught all levels of students - from those with no prior martial arts experience to police and correctional officers.

Daytime and Kids Class
Ryan Suhr currently holds the rank of nidan (2nd degree black belt) and has been been a student of Aikido Omaha, LLC since 2008. He is a licensed mental health practitioner and has committed the last ten years of his life to ensuring that children are safe in their homes and in their communities.

Paul Jakopovic began training in Aikido in 2007 after the encouragement of his Taekwondo instructor. Paul is one of Porter Sensei’s first students at Aikido Omaha. He has a Doctor of Pharmacy degree and practices in a local clinic pharmacy. Paul currently holds the rank of sandan (3rd Degree Black belt) in Aikido. He also holds the rank of 3rd Degree Black belt and Certified Instructor in Taekwondo. His training over the years also includes judo and weeping style jujitsu. Paul’s goals include striving for harmony in all of life’s challenges, one of the most important principles of Aikido.

The following instructors continue to influence Aikido Omaha but will not be regular teachers.

It was the first Aikido club to be opened in the Omaha area. Christenham Sensei is the Regional AHI Instructor and founder of Sarpy Aikido.  He currently holds the rank of 6th Dan.

Christenham Sensei also was a Golden Gloves boxer and has an extensive background in Kung Fu.

Sensei Kaulukukui was born and raised in Honolulu, Hawaii. He received a degree in physical education from a midwestern university. He has been an Army paratrooper, a high school teacher, a wrestling and football coach, a business lawyer, a community relations executive, and a state court trial judge. He is presently the chairman of the board of a trust that helps orphan and poor Hawaiian children.

He began to seriously study and practice martial arts in college, where he began his practice of the Korean art of tae kwon do. He eventually earned the rank of 3rd degree black belt. He has practiced kempo karate. He is also an olohe (teacher) in the traditional Hawaiian self‐defense art of lua.

He began his practice of aikido around 1977 under the instruction of Sensei Sadao Yoshioka at the Waialae Dojo in Honolulu. Beginning in 1980, he began studying aikido under Shihan Robert Kubo at the Kailua Dojo. Sensei Kaulukukui currently holds the rank of Shichidan ‐ 7th degree black belt.

Sensei Kaulukukui has participated in and taught at seminars throughout the United States and has accompanied Shihan Kubo as his otomo and assistant on trips to Japan and Sweden.

After the passing of Shihan Kubo, Kaulukukui Sensei became the chief instructor of the Kailua Dojo in Hawaii, and the head of the AHI organization.

Kubo Shihan (1935-2016) was born in Honolulu, Hawaii. He graduated with a degree in secondary education from the University of Hawai’i and taught in Hawai’i public schools for 30 years until his retirement in 1990. Kubo Shihan was the founder of Kailua Aikido Club and Aikido of Hawai’i International. He supervised dojos in Hawai’i, Nebraska, Florida, Missouri, California, Maryland, Colorado, and Pennsylvania.

Kubo Shihan began his martial arts training in judo at the age of 12 under the strict supervision of Yukiso Yamamoto Sensei who later became Kubo Sensei's Aikido instructor. He also held rank in Iaido.